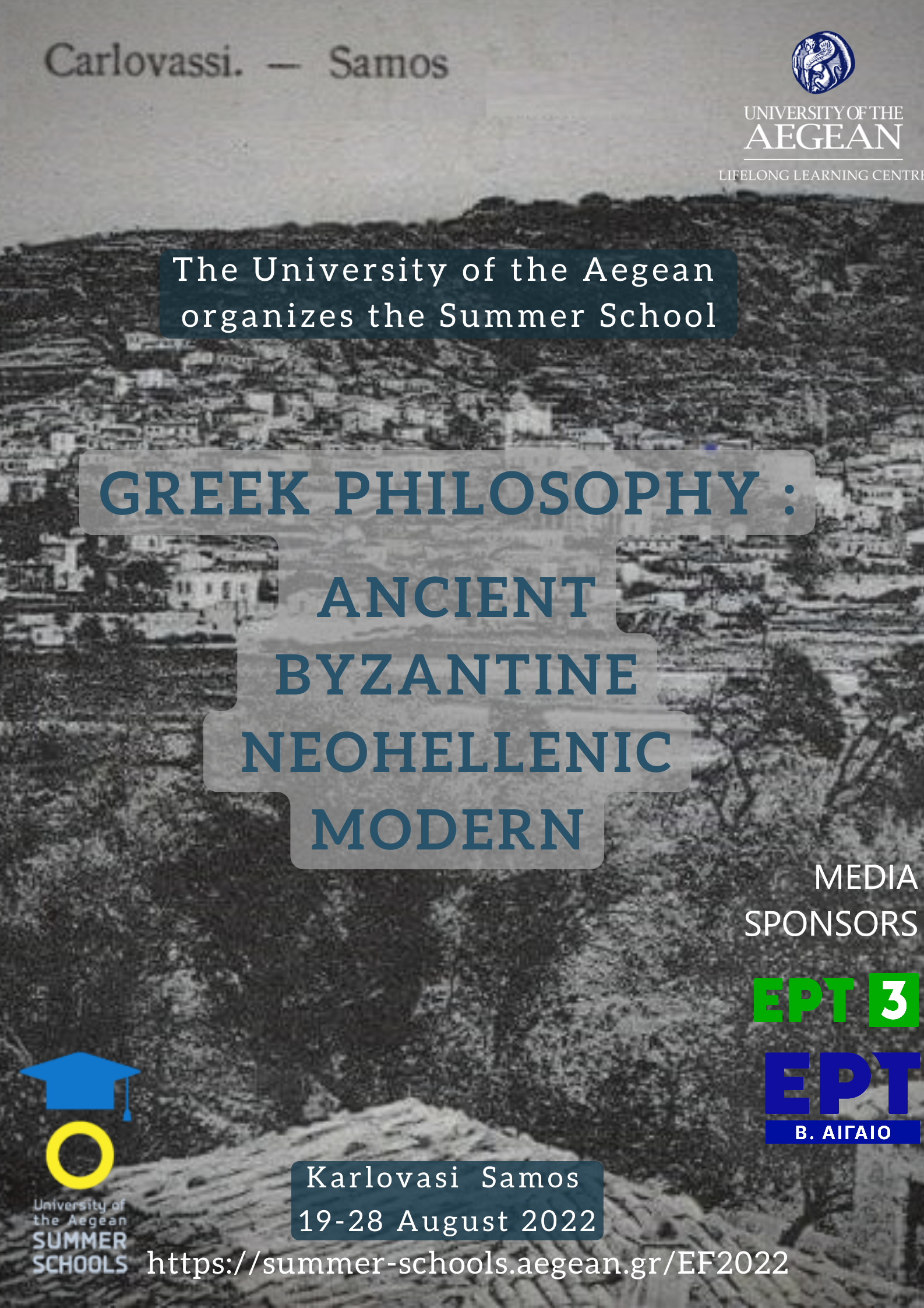 In the Summer School we will study the relevance, timelessness and continuation of Greek Philosophy. As the “womb” that first gave birth to Philosophy around 2,500 years ago, the Greek language has remained alive and with it Philosophy developed. Philosophical discourse has passed into all languages over the centuries, often maintaining the same Greek terms in order to represent ideas. However, the Greek language itself, through its inevitable transformations in the course of time, maintained an inextricable link with Philosophy. Philosophy and ideas expressed in the Greek language never vanished throughout history. In the School, we will basically examine the relevance of Greek Philosophy, either in its Ancient, Byzantine, or Neo-Hellenic versions, thus reaching the modern philosophical discussions of the Greek representatives, both in Greece and abroad. In addition, Philosophy, Greek Philosophy in particular, developed throughout History as a context for the revision of ideas, based on the needs and priorities of each period. As a result, Greek Philosophy, in contrast to other sciences, especially in the context of positivism, stood out with its peculiar timelessness, namely with retroactivity: the ever rekindling interest in earlier philosophical systems. For example, Ancient Philosophy was never absent from the philosophical conflicts of each era. Thus, with the flourishing of Modern Greek Philosophy during the previous and the 21st century, it is possible to claim that Greek Philosophy has a continuation, from its birth on the coast of Asia Minor to this day. In the School there will be a presentation of the main periods of Greek Philosophy:
a) considerable time will be allotted to the study of Ancient Philosophy (from the Pre-Socratics to Socrates, Plato and Aristotle and from there to the Hellenistic period),
b) as a crucial link for the transition to modernity, there will be a study of Byzantine Philosophy,
c)  there will be a presentation of the period marking the Modern Greek Enlightenment and finally,
d) adequate time will be dedicated to the study of Modern Greek Philosophy, in order to follow specifically how the relevance, timelessness and continuation of Greek Philosophy come into effect in modern times.

INFORMATION FOR THE FOREIGN STUDENTS: Adequate study staff in English will be afforded to the non-Greek speaking students (lectures summaries, Bibliography etc.). The discussion after the lectures will take place in English, if necessary. The final essay is accepted also in English.