Participants have to clarify that they will attend the Summer School of the University of the Aegean in Ecological Data Analysis (EcoDAR2017), when booking their rooms at any of these hotels. There will not be pre-booked rooms in any hotel. For any other information (availability, cancellation policy etc.) participants should contact directly the hotel of their choice.

By Boat: There is regular transportation from Piraeus (Athens) to Lesvos (Mytilini or Mytilene) by boat as well as from  Kavala.

By Plane: The airport of Mytilene (named “Odysseas Elytis Airport”,  IATA: MJT, ICAO: LGMT) is connected with flights from Athens and Thessaloniki by Olympic Air, Aegean Airlines, and Astra Airlines which cooperate with several European airlines. In addition, there is connection through Volotea with Athens, through Sky Express airline company, with the islands of  Ikaria and Crete (Heraklion), as well as with Volos.

Furthermore, charters fly directly to Mytilene from the UK (London, Birmingham), the Netherlands  (Amsterdam)  and other countries.

Find out more about charter flights at:

The Summer School will take place at the Campus of the University of the Aegean (University Hill-Lofos Panepistimiou) which is located about 4 km from city center on the way to the airport. There is regular transportation from and to the city by Mytilene buses (every half hour or every hour). Detailed bus timetable is given at: http://www.astika-mitilinis.gr/index 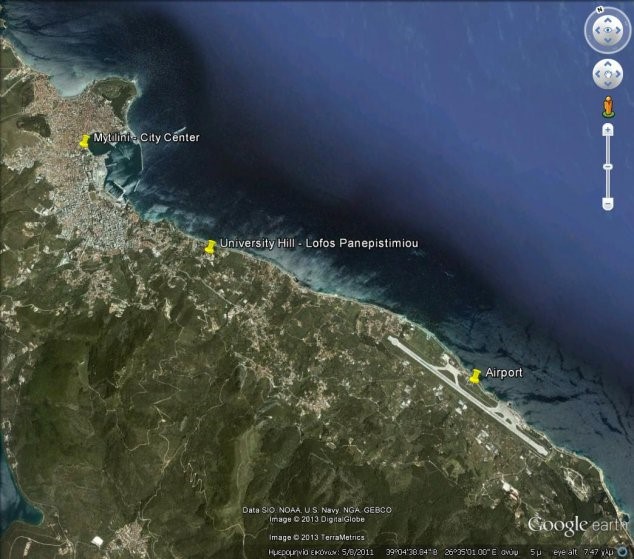 Lesvos is the third largest island of Greece with an area of 1,632 square kilometres  and a population of 90,643 inhabitants. It is called the island of harmony, beauty and calmness. Olive groves, pine forests, oaks, the gulfs of Gera and Kalloni and the impressive Petrified Forest of Lesvos on Western Lesvos compose a multifarious and particularly attractive natural landscape. The island of Lesvos is also renowned for its rich history and culture, which are depicted in a number of archaeological and historical monuments and works of art. Homeland of ancient Greek poets, such as Sappho andAlcaeus, father of botany  Theofrastus, modern Greek painter Theofilos, modern Greek novelists, such as Myrivilis and Eftalioties, and poet Elytis [Nobel Prize for Poetry in 1979].,

The city of Mytilene is a lively, fast-growing city of 40,000 inhabitants, and is the administrative centre of North Aegean since it hosts the headquarters of the Region of Northern Aegean. The city is built on small hills, on top of the ruins of an ancient city. The prosperous economic past of the city is impressed on beautiful mansions, while the establishment of the University of the Aegean has given it a fresh impulse and has livened things up.

The Museum of Industrial Olive-Oil Production of Lesvos